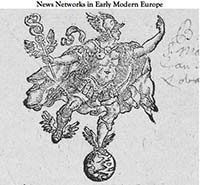 Throughout the period 1500-1700 new outlets, technologies and markets for producing and disseminating news developed in European countries. The huge expansion in the production and consumption of cheap print had crucial roles to play in the national, political and cultural formations of early modern Europe. Yet while the spread of news and newspapers crossed confessional, geographical and geopolitical boundaries, their histories have tended to be written from exclusively national perspectives. Funded by the Leverhulme Trust, ‘News Networks in Early Modern Europe’ brings together five leading scholars of news history from across the continent to establish new approaches to the study of news networks, their formation and their functioning, that will lay the foundations for a methodologically coherent European history of early modern news and newspapers.